There five types of pronouns:

A possessive pronoun is used to avoid repeating information that has already been made clear. Thus, pronouns make sentences less confusing.

Look at these bags. Mine is the red one.

Peter found his wallet but Jane couldn’t find hers.

All red hats are good. His are terrible. (possessive pronoun)

Both possessive pronoun and possessive adjective refer back to a noun and must agree with it in gender and number.

Incorrect: The boy lost their hats.

Correct: The boy lost his hat.

A reflexive pronoun is a pronoun that is preceded by the adverb, adjective, pronoun, or noun to which it refers, so long as that antecedent is located within the same clause. One could say that reflexive pronouns indicate that the person performing the action of the verb is also the recipient of the action.

A reflexive pronoun ends with “-self” or “-selves” and refers to another noun or pronoun in the sentence (usually the subject of the clause). The reflexive pronouns are myself, yourself, herself, himself, itself, ourselves, yourselves and themselves.

I was in a hurry, so I typed the document myself.

She’ll have to drive herself today.

John cut himself on the sharp knife.

John and Steve bought drinks for themselves.

The exam itself wasn’t difficult, but the examiner was too strict.

This is a beautiful house.

That is a great idea!

I see so many wonderful shoes in the store. Would you like to buy these?

Those were the days!

Demonstrative pronouns often function as adjectives. In this case, noun comes right after the demonstrative: this, that, these, or those. Such demonstratives agree with the noun they precede in number.

This book is great!

Could you give me that bag over there?

These houses are big.

The most common relative pronouns are: who, whom, whose, which, and that. Who functions as the subject of a clause or sentence, while whom functions as the object of a verb or preposition. Who and whom are used for people. Whose is used to show possession and can be used for both people and things. Which is used for things. That is used for people and things. In some situations, the words what, when, and where can also function as relative pronouns. Rules for using relative clauses:

She will choose the color which looks good on her.

Here, which is joining the two related clauses about choosing a color and a color which would look good on her.

It is the girl who got first place in the race.

The man whom I met yesterday is our new neighbor.

It is the boy whose uncle is a police officer.

The athlete who won the race trained hard.

The store on the corner, where we usually buy all our groceries,
was robbed.

The vase that was on the table is missing.

The main interrogative pronouns: what, which, who, whom, whose.

What is used to ask questions about people or objects.

What is your name?

What is the meaning of life?

Which is used to ask questions about people or objects.

Which way should I go?

Which car do you prefer?

Who is used to ask questions about people?

Who told you that?

Who is coming to the party?

I asked him who would be at the party.

Whom is used to ask questions about people. It functions as an object of the sentence.

Whom do you prefer to vote for?

To whom should I give my message?

Whose is used to ask questions about people or objects, always related to possession.

Whose iPhone is this?

I wonder whose car is parked in front of our house.

Indefinite pronouns are pronouns that refer to one or more unspecified (or non-specific) objects, beings, or places. They are called “indefinite” because they do not indicate the exact object, being, or place to which they refer.

Typical indefinite pronouns are: all, another, any, anybody/anyone, anything, each, everybody/everyone, everything, few, many, nobody, none, one, several, some, somebody/someone.

Somebody ate my chocolate!

Many have expressed their views.

A few of the customers were not satisfied with the service.

All were present at the meeting.

None of them showed up.

Either one is a good choice.

Each soccer player will receive a medal. (used as an adjective before a noun phrase)

The distinction in use is whether you refer to two people (each other) or to more than two (one another).

Have you met each other before?

Jamie and Peter always sit next to each other at school.

Sean and Mary love each other.

The criminals were fighting one another.

They haven’t seen one another since last year.

The soccer players spent the afternoon passing the ball to one another.

Intensive pronouns are identical in form to reflexive pronouns. They are formed by adding suffix -self for singular and suffix -selves for plural to personal pronouns.

An intensive pronoun places emphasis on its antecedent by referring back to another noun or pronoun used earlier in the sentence. Because they are used for emphasis, intensive pronouns are sometimes called emphatic pronouns.

She herself told me.

We should not confuse possessive adjectives with contractions: 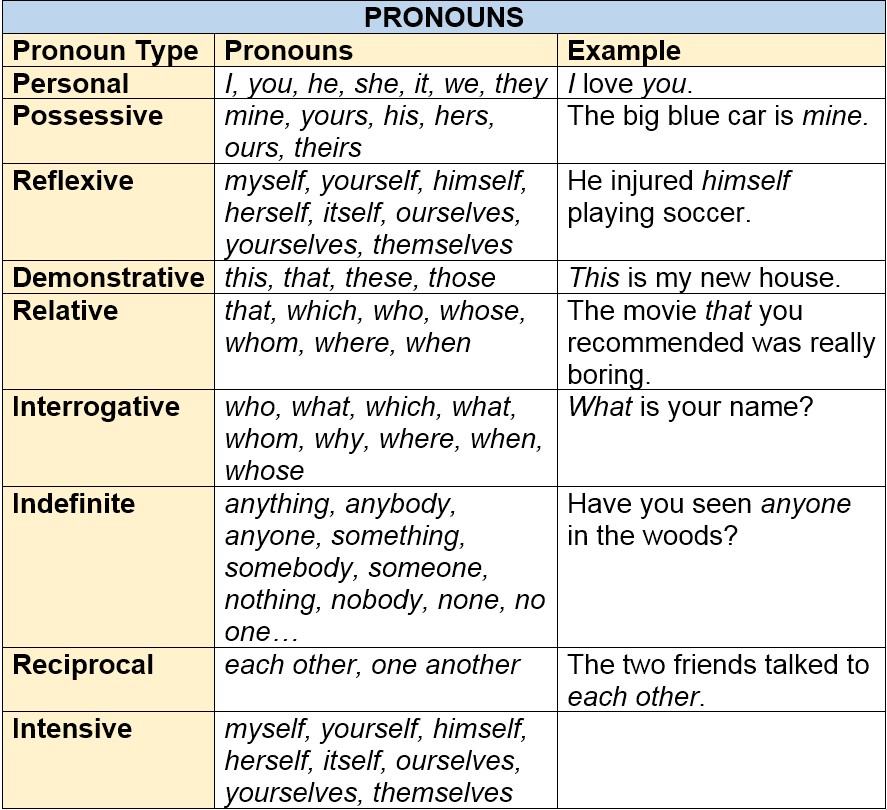