DEFINITION:  An adjective is a part of speech which describes, identifies, or quantifies a noun or a pronoun.

Predicative adjectives are linked via a copula (linking verb) to the noun or pronoun they modify.

The weather is cool and dry.

The girl is beautiful.

Other types of adjectives are:

Descriptive adjectives describe nouns that refer to action, state, or quality. and answer one of these questions:

He is a tall man.

They are good students.

She is a beautiful girl.

Peter has little knowledge about the world.

Monday will be the first day of school.

Possessive adjectives show possession. They are similar to possessive pronouns, but they are used as adjectives which modify a noun or a noun phrase.

Have you seen my car?

This is our house.

This pencil is mine.

Those books over there are expensive.

Its skin is dry and rough.

Which snakes are poisonous?

Whose pencil is this?

Aunt Mary and Uncle Shane are coming to visit us.

Comparative adjectives are used to compare two things. They imply increase or decrease of the quality or quantity of the nouns.

FORM:  The suffix -er is added to the base (stem) of the adjective to form most comparatives. When a two-syllable adjective ending in -y receives -er for comparative, we get -ier

Some adjectives have irregular comparative and superlative forms. These need to be memorized. 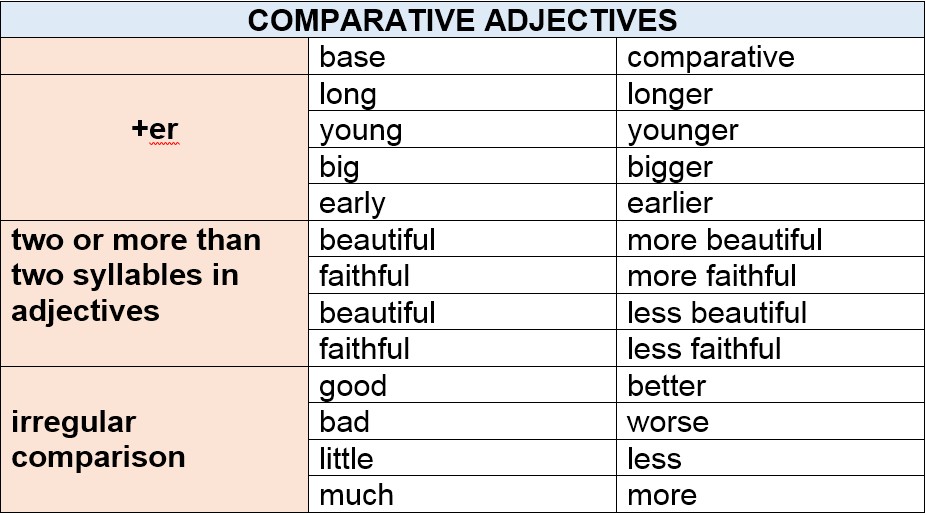 The Ohio River is longer than the Mississippi River.

James is taller than Peter.

Science is more important than soccer.

This sandwich is better than the one we had yesterday.

Superlative adjectives are adjectives that show the greatest increase or decrease of the quality in a noun.  If we are to compare more than two things, the superlative form of the adjectives should be used.

FORM:  We use definite article the before the superlative form of the adjective.

For the most part monosyllabic adjectives form the superlative form by adding suffix -est to the base (positive form).

When we form comparative and superlative forms of adjectives, we follow 6 rules.

RULE 2: Monosyllabic positive form of adjectives ending in -e receive only -r for comparative and -st for superlative.

RULE 3: Monosyllabic positive form of an adjective that contains a short vowel between two consonants (CVC) gets its last consonant doubled before suffixes -er and -est.

RULE 4: Disyllabic (two syllables) positive form of an adjective ending in -y undergoes a spelling change after adding suffixes -er for comparative and -est for superlative. In this case -y becomes -i, thus we have: -y + -er = -ier and -y + -est = -iest.

RULE 6: Some adjectives have irregular comparative and superlative forms. 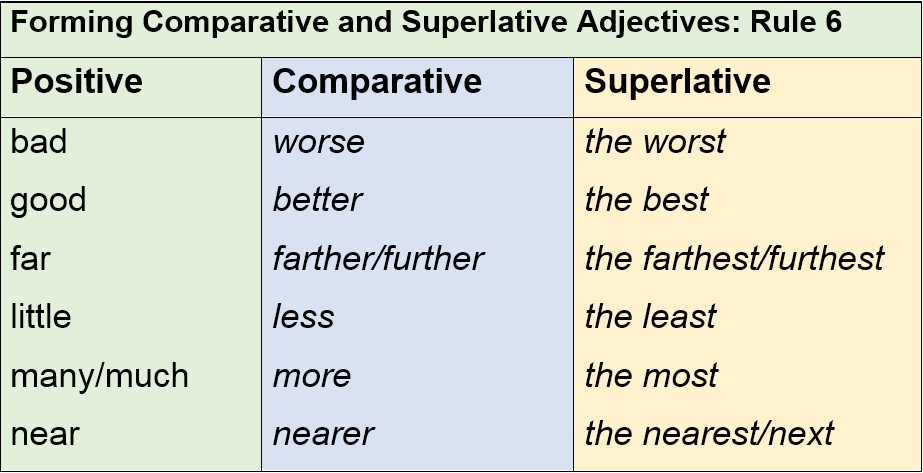 Sometimes we use more than one adjective in front of a noun.

In general, the adjective order in English is:

This is an interesting blue whale.

When two or more fact adjectives come before a noun, they normally go in the following order:

An elderly German lady stood in the corner of the room. (age + origin)