September 5, 2011 Written by @Reks
The goal of each activity is to assemble (“spell” or “write”) the target word in the card slots using some of the letter cards. The main components of the Build A Word Phonics interface are a notepad sheet with the target word written on it either in letters (pract 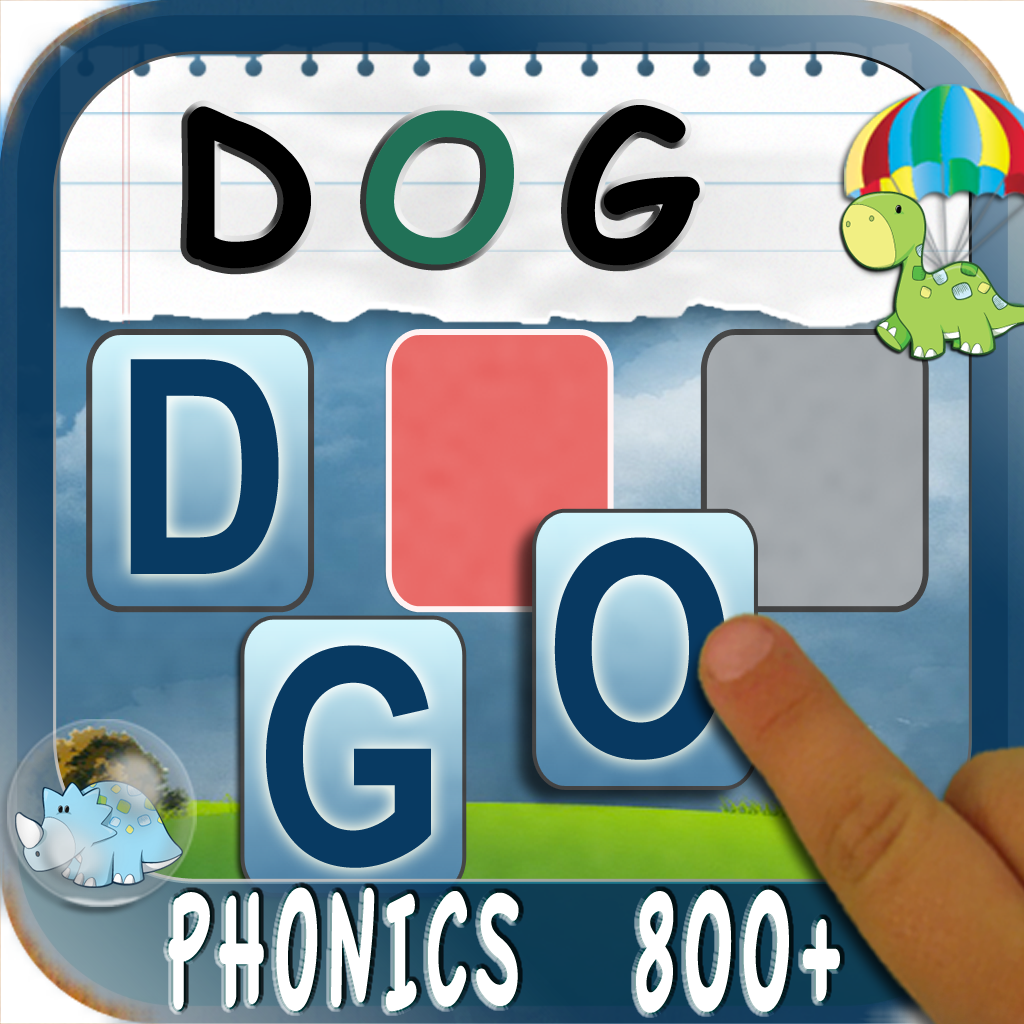 ice mode) or in question marks (quiz mode), several scattered letter cards and card slots in a number that matches the number of the letters in the target word. The target word is spelled either in upper- or lower-case letters.

The letter card can be dragged using simple gestures. Once the dragged card is near the appropriate slot the application places the card in the slot.Application settings (sound cues, response to shake motion, practice or quiz mode, level, letter case, and background), help and contact form are available via the information panel (iPhone) or retractable ribbon (iPad). An additional feature is a selection of different background pictures.

Build A Word offers approximately 200 words with phonics spelling and narration. These mostly include short and simple two-, three- and four-letter words with a short vowel in each word. Short vowels should be especially easy for beginners. Sound them out. Let your child recognize each sound, then “write” them together. Gradually, the child will become more and more independent.

1. Practice Mode offers children to practice spelling by relying on both audio and visual prompts.

To keep the children’s attention longer on the words, each successfully “written” word is followed by a game of popping balloons with dinosaurs inside. The child is drawn into the world of dinosaurs. The task is to save the dinosaurs captured and taken up into the sky in magical balloons. By popping the balloons the child enables the ancient creatures to use their parachutes and land safely. The number of balloons coincides with the number of letters of the “written” word.

There is an option to use blank background which covers a set of features designed to help special needs students focus in a relaxed atmosphere at their own pace. Once the blank background is chosen, the clock counter is turned off, the short game is turned off, and the extra card with a dinosaur is gone. The option not to time and keep scores relieves pressure and creates a relaxing atmosphere. The letters are easy to spot due to big letter cards. The process of tapping and dragging the letters goes smooth because the letter cards are wide spread which helps avoid overlap.  There is no frustration since visual and audio prompts in the Practice Mode lead the student step by step through the correct spelling process.  The right spelling technique becomes salient since the app leads the student step by step through spelling allowing dragging one letter at a time in the correct order.Wrong letters become obvious with the help of immediate sound feedback heard after tapping the wrong letter.  Repetition of audio prompt helps with hearing and remembering the word and sounds.

By now your child has learned all the letters, but connecting letters into words is still an abstract concept. It takes a while for the child to start writing first two-letter words, then three, four, and so forth.

2. we write one letter at a time

3. we follow  a certain order when writing letters (it is not random).

*explain the words if necessary

*be a role model for your child: WRITE!

To make spelling words less challenging for children, the words are usually divided into categories based on their phonics features. Thus, the children are introduced to short-vowel words first, then come long-vowel words and sight words.

The easiest group of words would be short words consisting of short vowels (usually one or two consonants). When there is a single vowel in a short word or syllable, the vowel makes a short sound. These short vowels usually appear at the beginning of the word or between two consonants. In such words the number of pronounced sounds most usually corresponds to the number of written letters. This concept is the most salient concept for young beginners. Examples of such words are: cat, end, pig, bus, log …

Create your own spelling word lists

The following links will guide you through the most frequently asked questions:

1. How do I create custom spelling-word lists in Build A Word – Easy Spelling with Phonics?

3. Is the pronunciation of phonemes correct in this app?