January 4, 2016 Written by @Reks
Latin language has survived through the vast body of literature and inscriptions that have been preserved. Thus, we study Latin

How do we teach Latin? Most of us older Latin learners remember learning Latin through the combination of Reading Method in teaching Latin and Grammar Translation Method where drills and memorization are the focus. Later came the voices that promoted the idea that developing listening, speaking and writing skills, even in the case of Latin, will only support reading abilities[2] and help acquire the new language. Finally, the modern day technology gave us additional resources to reinforce language skills. Thus, an electronic tablet such as iPad, or iPad Mini, represent the new era in education.

Lingua Latina Verbs iOS application focuses on Latin verbs: grammatical aspect as well as their English counterparts. It was designed following Communicative Language Teaching (CLT) Approach. Namely, the app was planned to be a part of Presentation, Practice and Production language teaching methodology.

Presentation – Practice – Production, or PPP, is a method for teaching structures (e.g. grammar or vocabulary). As its name suggests, PPP is divided into three phases, moving from tight teacher control towards greater learner freedom. Practically the method relies on the progression from presentation, through controlled practice, to free production. Having this in mind Lingua Latina Verbs App was given three main parts Learn, Practice and Quiz.

Presentation in Lingua Latina Verbs iOS App is given in the Word List on the Home screen of the App and in customizing Learn and Quiz Modes. 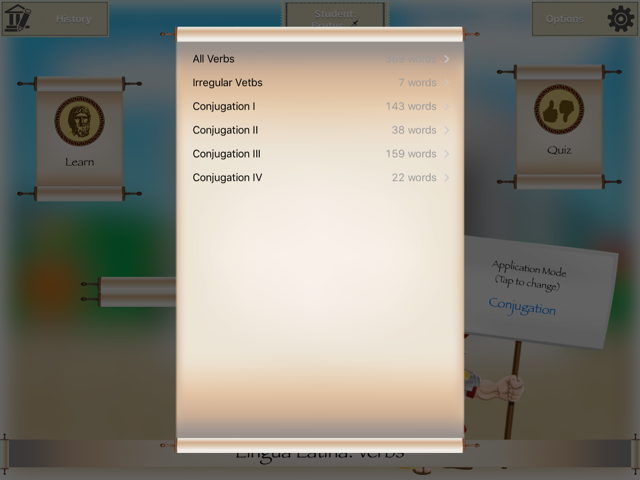 Learn Mode in Lingua Latina Verbs iOS App can easily be transformed into a presentation part. To achieve this, choose 0 for Number of Extra Words in SETTINGS. 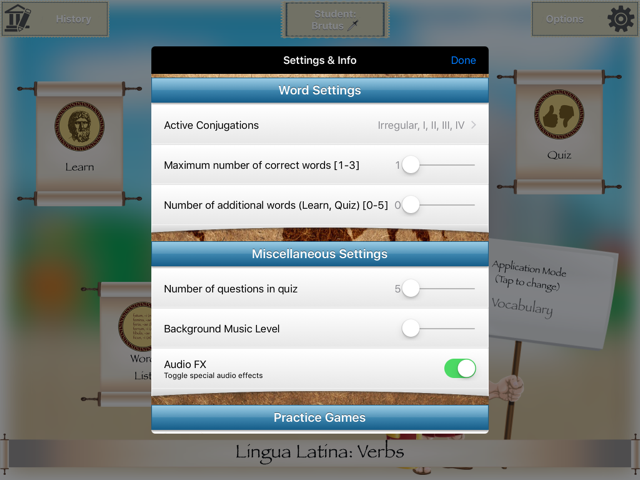 This means that you will see in the Learn Mode only the correct answer to the question. A student is given an option to learn either vocabulary or grammar (Four principal parts of the Latin verb, or Conjugation: I, II, III, IV, or “irregular”) in Learn Mode. 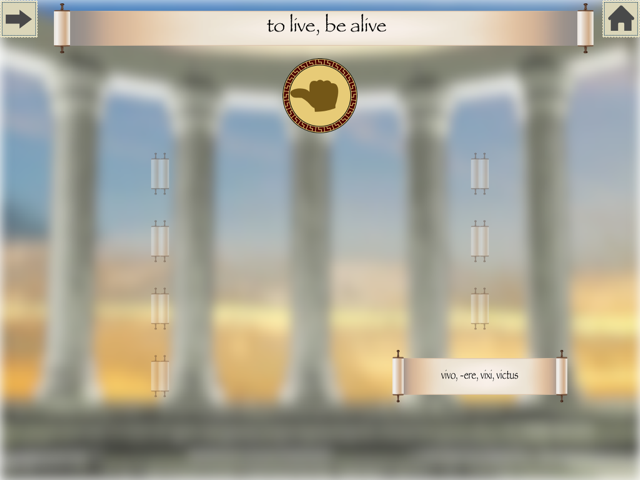 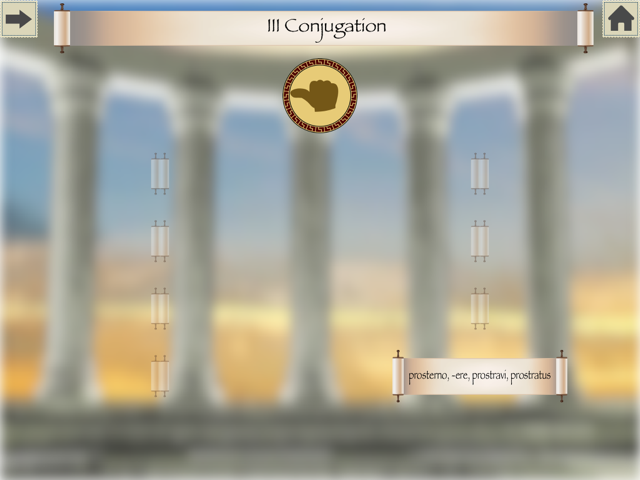 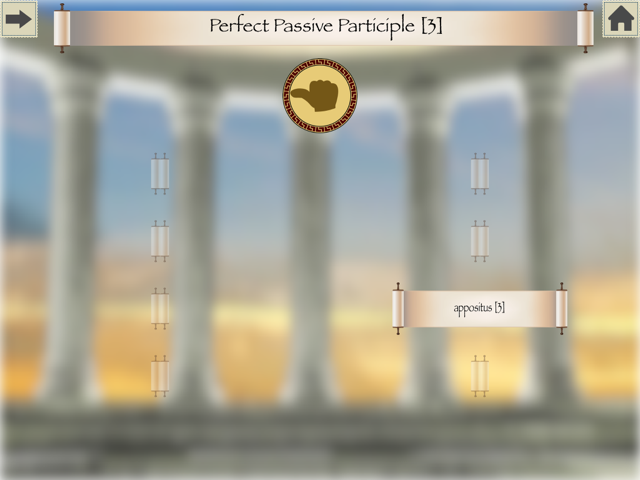 A student is given an option to practice either vocabulary or grammar (Four principal parts of the Latin verb, or Conjugation: I, II, III, IV, or “irregular”) in Learn Mode. 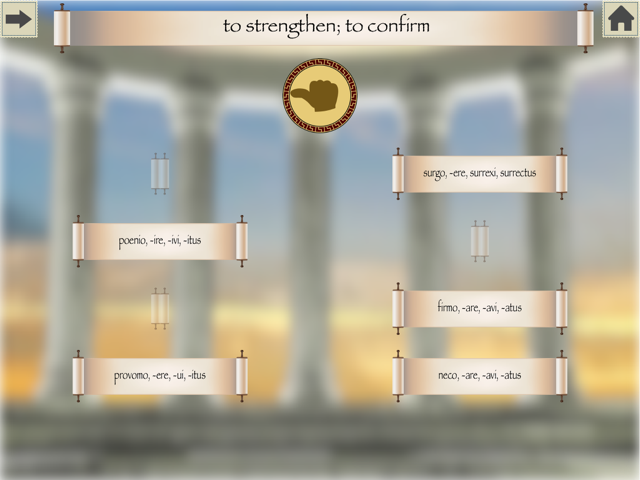 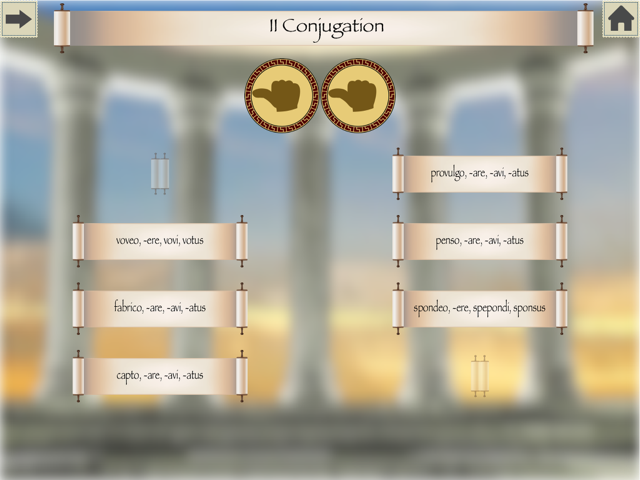 Practice Mode consists of a number of games. The gameplay of each game includes the use of Latin words, that is, Latin verbs. These games are much less controlled than the activity in Learn Mode. Upon tapping an incorrect Latin verb, or an incorrect spelling in Word Search, the games are set to indicate lack of success which may lead to pausing or stopping the game and inviting the student to try again.

There are five games: 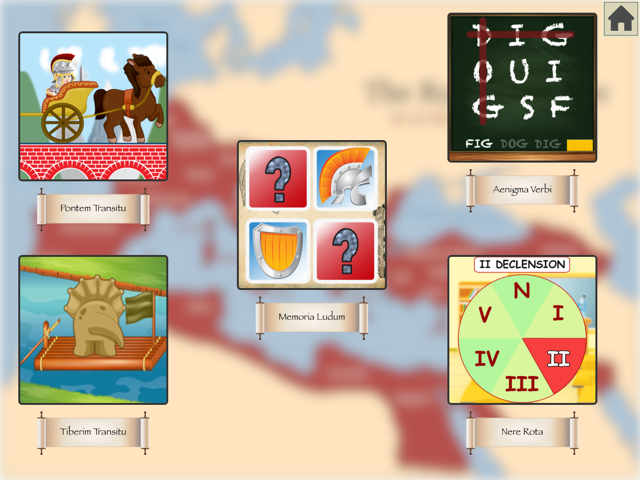 Memoria Ludum is a classic memory game that expects students to match only the same Latin verbs. As all card matching games, this practice game is best played with a friend(s). With this game students become more exposed to Latin verbs. The repetition of the revealed cards reinforces acquisition of Latin words. As the position of the cards with verbs is important, a student has to memorize both the position and the verb itself (spelling included).

In SETTINGS, you may choose 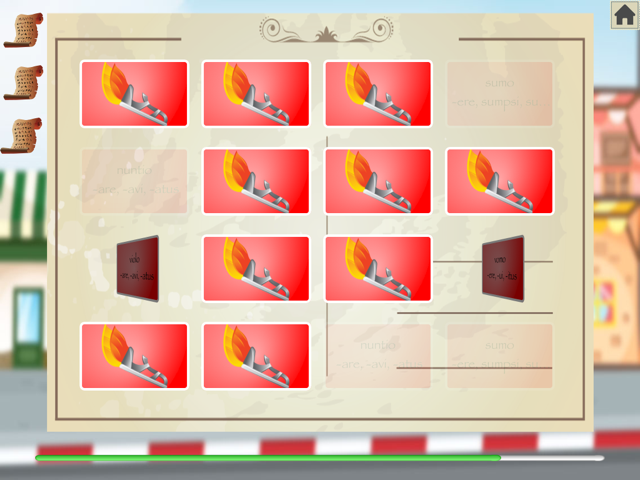 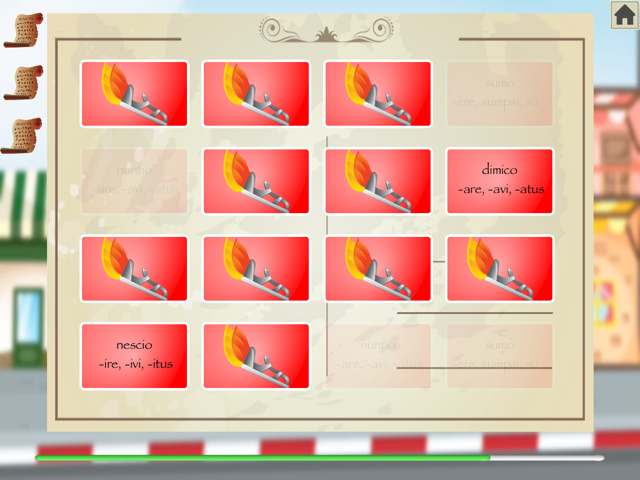 Pontem Transitu game reveals Roman soldiers in chariots. Each chariot carries a word. An English definition of the sought word is on the bridge.  A student is expected to tap the word on the chariot that corresponds with the English definition/translation on the bridge. If the correct word is tapped, the Roman soldier and the chariot go under the bridge safely landing. If the incorrect word is tapped, the soldier and the chariot disappear into the clouds with a sad “No!”In SETTINGS, you may choose.
This activity practice game can be given to students to do individually or in pairs. As pair-work activity this educational game gets a competitive and fun aspect. 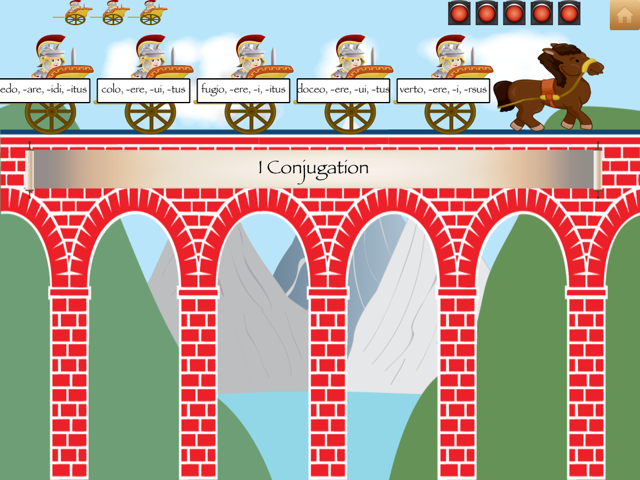 Tiberim Transitu game is a fun game in which a student is trying to help an animal (elephant, rhino, pig, monkey…) cross the river by jumping from one raft onto another. The animal has to jump onto the raft (or boat) with the word that corresponds to the English translation/definition offered on the top of the screen. The animal is enabled to jump by a gentle tap on its back. The rafts with the correct and incorrect Latin words are moving all the time from left to right, and from right to left. The trick is to tap the animal at the moment the raft with the correct Latin word is just in front of the animal. 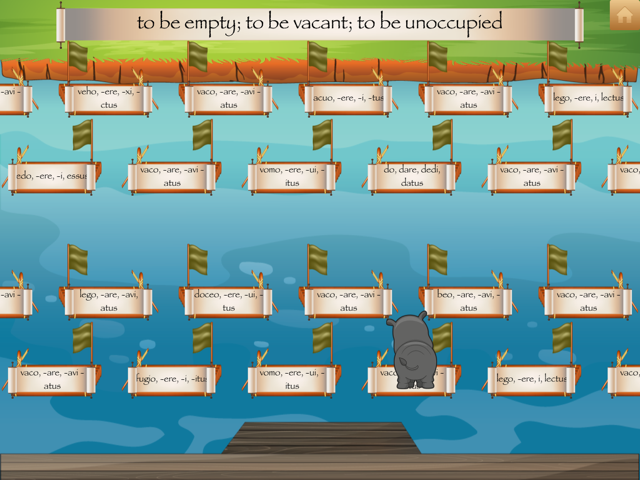 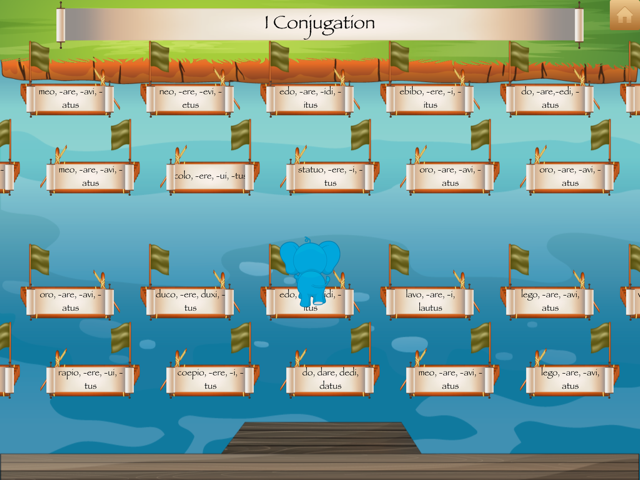 Aenigma Verbi game is a classic word search game in which a student attempts to cross out letters that make a certain Latin word following Latin spelling. A list of words is given in a column on the right hand side of the screen. A student looks for each word in a square filled with letters. 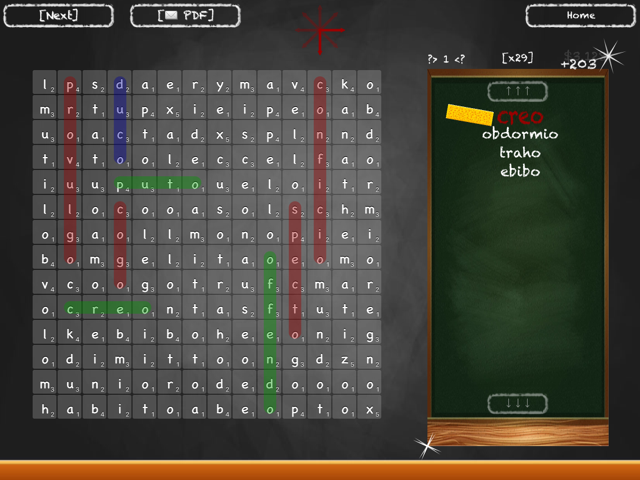 Another idea is to turn this into a vocabulary peer testing or even a competition. One group writes down several (3 to 5) verbs from the 1st conjugation, another group writes down 3 to 5 verbs from the 3rd conjugation. Then, group one reads their Latin verbs without offering translation. The second group is expected to translate those verbs. Next, the groups switch roles so the second group reads their Latin verbs and the first group translates those verbs.

Lingua Latina Verbs did not include the Production Phase of PPP in the design of the app. It is left to the teachers/caregivers to involve students in using their knowledge of Latin verbs by writing a simple narrative using some of the words from the app and showing they have mastered vocabulary and grammar. Students may be asked to invent a short poem (e.g. an acrostic poem in Latin or English but using a Latin verb for the beginning of lines).

You can choose whether you wish the students to be tested on grammar (Four principal parts of the Latin verb, or Conjugation: I, II, III, IV, or “irregular”) of Latin verbs or vocabulary. This can be chosen on the home screen of the app. Furthermore, you can choose which conjugations should be included in the quiz. For this option go to SETTINGS, then Word Settings – Active conjugations, and finally tap the Roman numerals representing verb conjugation to choose the desired conjugation(s). Also, you can choose the maximum number of correct words to be used in the Quiz in SETTINGS of the app (go to Word Settings, next Tap to select active word classes, and then tap next to the desired rhyming letter cluster). 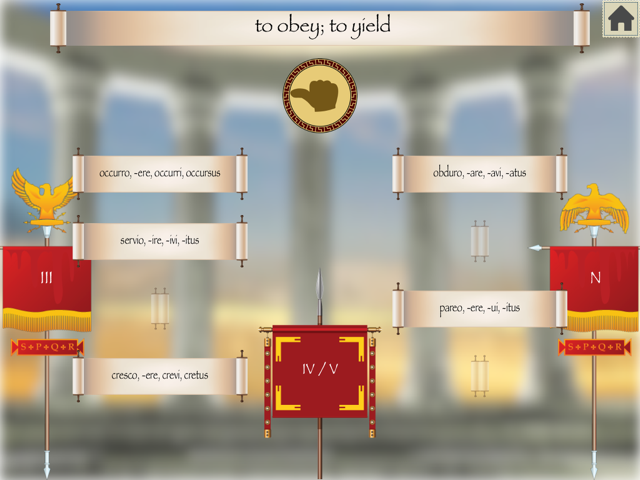 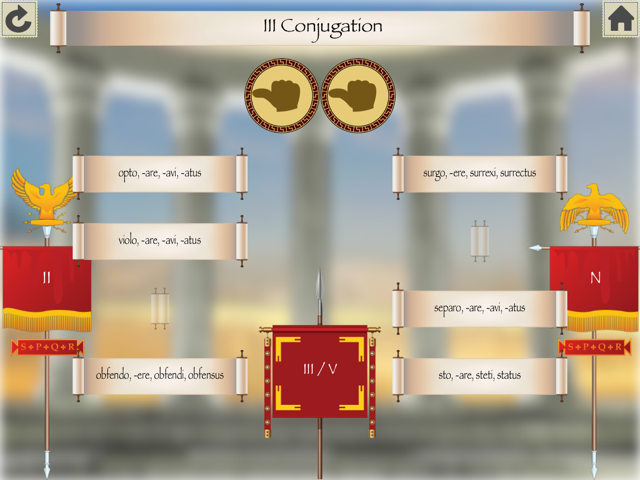 After completing the quiz, Quiz Summary (Student’s Progress) is given with information on the 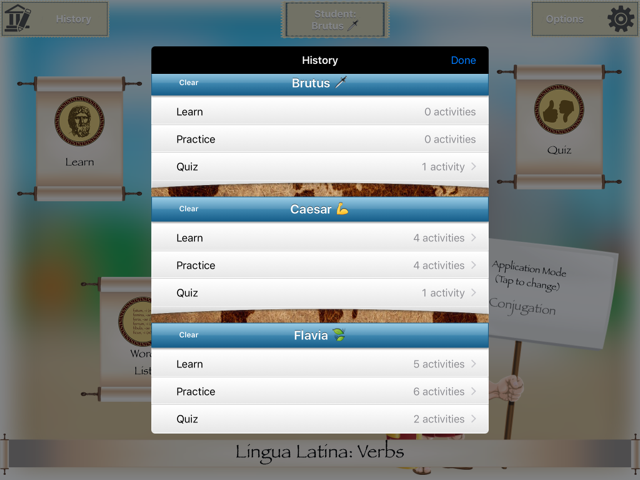 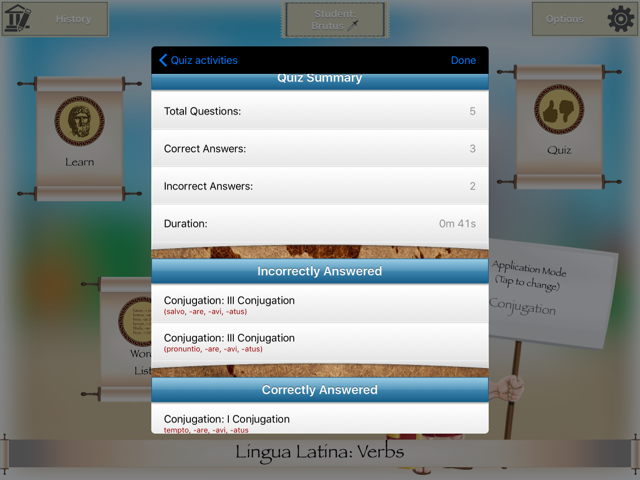 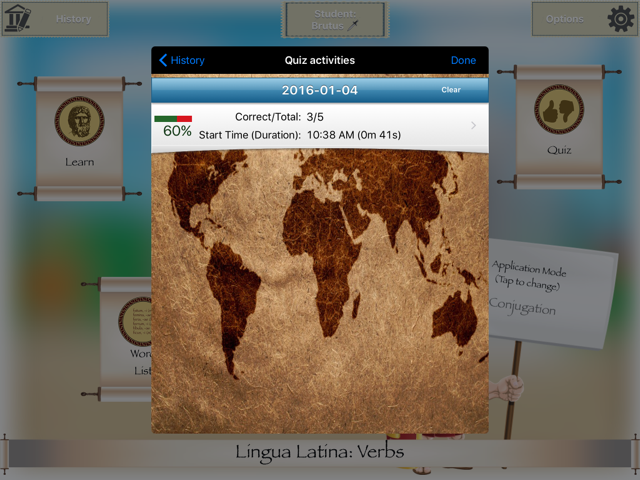